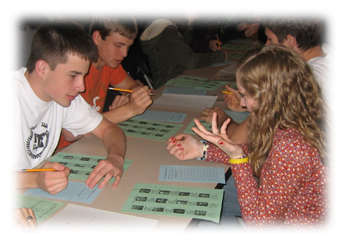 What Do Players Learn?

PRESIDENTS players learn about and develop an understanding of the personalities, historical contexts, political decisions, and other events of the Presidents of the United States of America.

Players learn how presidents developed personally and professionally, how they reacted to or changed the times in which they served, what types of families they came from, and how they were affected by the political climate surrounding them. Players also learn about other major events that may have happened during a presidential term. They learn to assimilate all of these different facts into a unified whole for a better understanding of how the United States government has worked in different historical times.

Players on a team from a school spend a great deal of time studying together and exchanging ideas and notes as part of their learning experience. They also learn to use data to draw conclusions.

Elementary Division (grades 4-6) questions are composed with easier language than for the Middle Division (grades 7-8). At the Junior and Senior Divisions (grades 9-12), the historical and political events are more demanding, plus the players are expected to know how other major U.S. Leaders may have played a part in the events of an administration.

How Do You Play?

Elementary Division and Middle Division only study half of the U.S. Presidents for the given year. Questions for the Junior and Senior divisions can refer to any president to date.

PRESIDENTS is a questions and response game. Students sit in groups of three or four for purposes of checking each other’s answers and keeping score. Many such groups may be playing simultaneously in the same room.

Players are given a range of PRESIDENTS that they may consider for their answer. For instance, the range for a particular round may be PRESDIENTS 25 – 33.
For each question in a round, a central reader reads a series of three clues about one of the presidents, pausing after each clue.
A player who can identify the president after the first clue scores 6 points.

A player who waits and can identify the president after two clues earns 4 points.

A player who waits until all three clues are read and then answers correctly scores 2 points. Player whose answers are incorrect score 0 for that question.

Players may not change their answer once it has been submitted. When all three clues have been read, players reveal their answers. After the reader announces the correct answer, scores are recorded and the next question is read. A round consists of 8-10 questions. Students are provided some assistance in identifying the presidents. While listening to the clues, players may study AGLOA’s approved chart which lists each president’s name, political party, dates in office, year and state of birth, and year of death. Often one of the clues refers to this information, which gives players practice in drawing conclusions from printed data. The charts can be found to the right of this page.

How Do I Get the Academic Games, Rules and Study Materials?

Check the links to the right to view and print the Official Tournament Rules and/or to obtain the study materials that have been written by experienced coaches over decades. Hundreds of questions from past Tournaments are available for study, as well as other hints and clues.

Forms for use in Tournaments may also be printed from the links on the right, including the PRESIDENTS Facts Sheet that may be used by each player during the Tournament.

The Official Tournament Rules are modified slightly every year based upon suggestions from member Leagues and the National Committee.

Visit the US Presidents wikipedia page at https://en.wikipedia.org/wiki/List_of_Presidents_of_the_United_States

We support the National Association for the Education of Young Children at http://www.naeyc.org/

We’d like to thank http://www.golfsw.com for sponsoring this page. Golf Southwest offers course reviews, pga tips, and more all for free.

We’d also like to thank https://redeembonuscode.co.uk for their support.