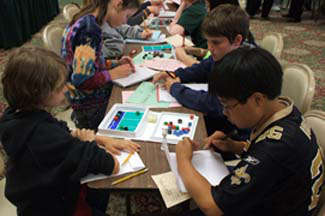 I attribute my life successes to academic games. As a young black kid growing up in Detroit, there were obstacles that presented themselves and often prevented success. With supportive parents, a love for math and a dedicated teacher, I was able to tap into my potential and realize it early in life. Mr. Holstein will forever be my favorite teacher. He saw a mind that wanted to prosper and offered me a tool that exposed it. Without academic games I don’t know what choices I would have made in life. Looking back and understanding the ingenius way to teach kids to broaden their scope on math is incredible. My kids do not live in an area that offers academic games but I plan on presenting this concept to their school here in Rockford, IL. It truly changed my life. Thanks Mr. Steigerwald for this opportunity to contribute and keep this flame live because it made a difference in my life.

Academic Games is great because it helps kids who maybe aren’t as good at academics to achieve, but it also helps kids who are very good at academics, but not as good at socialization, to relate to other kids. The combination of those two things is what makes it unique. (For me, Academic Games) took a shy, introverted kid, and gave him confidence in himself and his ability to affect other people.

When I was first thrown into the gifted job three years ago, the thing I was most worried about was Academic Games. I didn’t know anything about them and didn’t think I would EVER learn to play them, let alone enjoy them. After three years, I have grown to love academic games more than any other activity that we do.
The first year we attended nationals, I had to pay for my own trip because the district didn’t pay for out of state activities. Each of the 5 students paid all their own expenses and also took a parent to New Orleans. The cost was overwhelming, but the rewards were great. I started to see some interest and the kids became more motivated.

The second year, the district paid for the registration fee and transportation for 9 students, but the students and I were still responsible for the bulk of the trip and I had to drive the school van 9 hours to North Carolina and still be at school the day after the competition. When someone asked me why I was doing this crazy thing, I said, “because the kids really want to go and I can’t let them down.” When we came back with our first trophy, everyone, including the school board, administrators and other students, sat up and took notice.

When 21 students qualified for Nationals this year, the whole district started to take notice. The school paid for my trip this year and gave us a school bus so I didn’t have to drive. When we arrived home with two trophies and two medals, the motivation for next year went through the roof. I had parents offering to help with fundraisers and buying materials for next year.

One of the best rewards of academic games is to see the confidence grow in students that once thought they weren’t good enough to compete against other schools, just as I thought I would never learn the games. One of the best learning experiences for them is telling them that I, too, had to learn the games and I was able to do it and they can too. After attending nationals this year, I sat back and reflected on all the things my students learned and how those lessons are so relevant to life. They learned about confidence, peer pressure, defeat, motivation, social skills, how to balance work and play, how to plan out a schedule and work together as a team to accomplish a goal.

When we got back into our routine of the regular school day, I asked the kids who attended nationals for the first time how they felt about the games. Responses included; “It was the best experience of my life”, “I have never learned so much in one weekend”, and “I can’t wait to go back next year.” Seasoned nationals players said it was the best nationals so far and they are really looking forward to getting more students to go with us.

As I walked into my middle school classroom for the first time since the games, I was bombarded with questions about next year by the 6 students that went this year. They wanted to know when I would have all the new materials ready for next year’s games so they could start studying over the summer. That is why I coach. What else could I do that would motivate 13 and 14 year old boys to want to study over the summer?

What else could I do that would make elementary kids want to save their birthday money so they can go to nationals next year? The fact that high school students want to study at all is an incredible testament to what these games mean to my students. It’s not about the recognition or the bragging rights, it is about how these games make them feel. I coach because they want me to. As long as there are students that are motivated to become better, I will bring students to Academic Games.

I just think of all the kids who wouldn’t really have a place in their school. Maybe they’re too shy. They’re bright kids, but they are not aggressive. Academic Games has been a way for them to come out of that shell. That’s probably my favorite part of these games. It’s a place for those kids, where they can slowly fit in and excel, and learn to be competitive. A lot of kids learn competitiveness and self-esteem through sports, for these kids it’s Academic Games.

AG is the only competition I’m aware of where kids have the opportunity to independently develop their own mathematical formulas and algorithms. In all other math competitions that I’m aware of, the students are given problems to solve, and they’re trained by learning and practicing techniques to solve the problems. In Equations students prepare for competitions in large part by developing their own techniques for winning, as well as by learning from other students techniques that have been developed by earlier generations of players. For me and for many mathematically gifted kids, Equations was an unparalleled opportunity for mathematical exploration. In searching for Equations strategies I studied and applied college-level texts in number theory and advanced calculus. I participated in other mathematics competitions as well but none of them necessitated any such independent study.
I think the game of Equations can be one of the first opportunities kids can have to really get a sense of how mathematics can be beautiful. In math, you talk about a proof being elegant, meaning in general that the proof is concise and unexpected. The solutions in Equations that players generate can also have these qualities of concision and unexpectedness. Equations directly rewards these qualities — if your solution is concise, you can move the unused cubes to Forbidden and kill off the lengthier solutions, and if your solution is unexpected, your opponent will not guess it. The competitiveness of Equations leads students to internalize this sense of elegance to a degree that’s scarcely possible in any other setting before college. If an Equations player talks about a “cool” solution or strategy, any other experienced player will know and appreciate what is meant, though the players may not be able to name anything “cool” in any math class they’ve ever taken. (For that matter, the game of Equations is itself elegant in that it generates an amazingly large universe of possibilities from a concise set of rules.)

I can say that Academic Games has changed my life irreversibly. The Ann Arbor coaches touched my life in a way no other mentor has for me: they taught me the value of having fun in everything I pursue, in giving back to my community, and in having passion for learning. These lessons I’ve carried with me ever since I played from 6th to 8th grade (2001-2003) and they have spurred me to accomplish many things. My love of community service, for one, and starting an Academic Games program in a school district that as of yet did not know of AG. As a coach, I hope that I have also passed on the lessons that have guided me in the past few years to my students. The program that I have started is now under new leadership and I’m confident that they will thrive. As I go on now to Princeton University, I plan to continue staying involved in Academic Games by starting a program in New Jersey.
As a side note, I have received many merit-scholarships this past year, amounting to a total of approximately $35,000 over four years. Many of these I received for my involvement in community service, particularly Academic Games. The most noteworthy of the scholarships– the National Toyota Community Scholar Award– was awarded to only 12 high school seniors nation-wide. The application asked that I discuss a community service project I was/am involved and to elaborate on the impact the activity would have across the nation or event the world. I wrote about Academic Games.

To me, Academic Games is more than just an afternoon activity. It is an organization that I love and that I feel I have joined for life. These seemingly mystifying games, with their peculiar rules and terms, have become a cornerstone of my high school years. I have found that Academic Games does not merely teach students about sets of numbers or important leaders. Through dedicated moderators and enthusiastic participants, this group opens doors to numerous opportunities and lifelong friendships. Through the years spent with this amazing organization, my friends and I have learned the spirit of friendly competition, the strength of team camaraderie, and the elation of winning. Academic Games builds communities across the country of dedicated and intelligent people. I have met such lifelong members of this community in the moderators who were once student competitors. I can only hope that as my friends and competitors finish playing, we will begin coaching, so that a new generation of students will be able to experience this life-changing organization.

A day doesn’t go by without me relying upon the insights I gained from participating in Academic Games. I first realized this in graduate school when the education system at large finally got around to teaching ways of abstract thinking that AG participants were first introduced to in the 5th grade. The world knowledge of Strange Bedfellows provides a constant source of understanding of that beyond self and our own existence. Propaganda develops critical thinking in a world based on self and societal deception. On-sets, well what can I say, is a fundamental approach at managing large amounts of information by breaking it down into well defined sets to add in processing, a valuable skill in all fields of life. Equations have been useful in the obvious ways. Ameria-Euro and current events puts our place in time in perspective. Presidents makes for good trivia pursuit. And, of course the overall lesson, strategy, the value of information and the understanding people in general all tied up in a fun, social experience.

Academic Games has taught me the value of teamwork, hard work, and dedication. Through AG, I have strengthened my self-confidence and ability to lead teams and groups. In all, AG has been the most valuable experience in my life.”