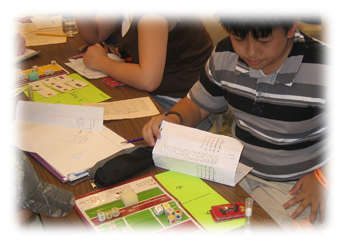 What Do Players Learn?

This game is very valuable in teaching about spatial relationships. The mathematical content of the game is Set Theory. Players learn to create and describe sets of colored objects using Union, Intersection, Set Difference, Set Complement, the Universe, and the Null Set. The practical applications of this game are relevant to use of the internet. In researching a specific article on the internet, a person finds the best articles by using a search engine and including information needed and restricting information that is not needed. This concept of narrowing down information to get exactly what one wants is highly developed in the game of On-sets.

Each division level of competition introduces increasingly more difficult mathematical concepts for the players to use by adding age appropriate variations to the basic game. Players are challenged to use their mathematical knowledge and skills in increasingly creative ways and usually learn more from applying their knowledge in the competition than they do in their normal classroom studies.

How do you play?

All grade levels play with the same set of procedural rules. Each match involves three players from different schools. Many such matches occur simultaneously and last for 35 minutes. Depending upon the time scheduled, two or three such matches can take place on a given day.

ON-SETS was invented by Yale Professor Layman Allen in about 1965. The game consists of a playing mat, a set of cards with various combinations of the colors Red, Blue, Green, and Yellow (including a card with NO colors), and cubes that have numbers, the four card colors, the various set Operations- Union (U), Intersection(∩), Set Difference (-), and Set Complement (‘), and the Universe (V) and Null symbols (Λ).

One player sets out six to ten of the cards face up (possibly more for senior division). These cards are called the universe. Another player rolls the cubes and sets a numerical GOAL (such as 5). The object of the game is to figure out and name a specific group of cards that matches the goal. This is called the set name.

Examples of groupings or set names are RUG, which names all cards in the universe that have the color red or green, or Y ∩ B’, which names all of the cards that have yellow and do not have blue. More complex expressions are created by the High School players.

Special rules called Variations are used in each Division and serve to challenge a players higher order thinking skills according to their grade level. Before the cubes are rolled in a “shake”, each player selects one Variation from the list provided for that Division. In subsequent “shakes,” players may select different Variations. A 35 minute match may involve two to six “shakes,” allowing many different mathematical concepts to be applied. Once the Goal is set, players take turns moving cubes to the playing mat. The mat has sections marked Required, Permitted, and Forbidden. Any cube moved to Required must be used in a Solution; any cube in Permitted may be used; any cube in Forbidden may not be used. This allows the players themselves to shape the Solution, forcing one another to create new Solutions in response to moves. In any one “shake,” a player may create and examine fifteen or twenty different Solutions, depending upon the moves of the other players.

Winning the game:
At any point a player may challenge “Now” or “Never” against the person who moved last- the Mover. A “Now” challenge means the player who challenged -the Challenger- can make a Solution using all of the cubes in Required, maybe some from Permitted and at most one more cube from the Resources. “Never” means the Challenger believes the Mover cannot make a Solution using all the cubes in Required, and any other cubes from the Permitted section or the Resources. After a challenge, at least one player must show a correct Solution on paper. If no player can show a correct Solution after a “Never” challenge, the Challenger wins.

The full procedural rules for On-Sets can be viewed or downloaded at the right.

How Do I Get the Academic Games, Rules and Study Materials?

Check the links to the right to view and print the Official Tournament Rules and/or to obtain the study materials that have been written by experienced coaches over decades.

The ON-SETS Academic Games may be purchased from WFF’N PROOF publishers. For competitions, each school must bring one ON-SETS game for every three players that will compete.

The Official Tournament Rules are modified slightly every year based upon suggestions from member Leagues and the National Committee.

Leave us your thoughts below!

Support education for children at https://donate.worldvision.org/ways-to-give/education

We thank williamspromocodes.co.uk for their support.

We also thank https://williamhillpromocode.co.uk for their support.